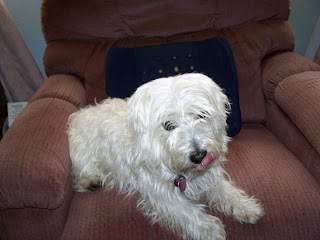 The runaway, looking all innocent!

So I knew that Merlin was a "runner." Most Westies are-don't let them loose, they take off and Lord knows where they'll stop. With Chloe, I knew she was crazy about kids and I could usually get one of them to pick her up so I could get her. She, of course, wouldn't let me pick her up-that was part of the game!

I invested in one of those radio fences-the kind that has a base unit you plug in in the house and collar that acts as a receiver. When the dog gets out of range, the collar starts beeping and if doggie doesn't come back it give him a little jolt. It sounds cruel, but I think it is very humane-the dog can't run off, get stolen, or get hit by a car. Chloe learned very quickly what her boundaries were, and in fact that's when she became the good pet she is now. She turned into the sweetest most compliant dog-a real loving companion. It also gave us the freedom of installing a doggie door because we knew she could go out, do her business and come back in. Really nice during the night or if we had to be gone a few hours. She didn't have to stand by the door with her legs crossed or piddle on the floor.

Enter the novice dog. I bought a collar for him ($139.99 thankyouverymuch!) and am starting to train him with it, meanwhile chaining him up when he goes outside. This morning, I briefly unhooked him from the chain to untangle it and he was off! He made it all the way to the elementary school, three blocks away, where a teacher picked him up. We know the principal, and when he saw me he knew exactly what I was looking for. I suppose the leash in my hand gave me away!

I got him home and brought him inside. The chain was still outside so I tried to slide the patio door open enough to retrieve it and out Merlin went again! This time I wasted no time in getting the car-it seems he likes to ride in cars. I found him at the house right behind ours, on their porch shivering. I called for him to "load up" and he came right to me. I wasted a whole morning on that dog!

When I got him home AGAIN, I got out the new radio collar, tested it, and put it on the dog. We've done a bit of training with it, but it'll take a couple of days for him to get the idea that running away is what causes that "bee sting."

In the meantime, I'll do a triple play-radio collar, chain, and when I go get him off the chain, I'll take the leash. And he's going to be neutered very soon-I have a call into our vet.

I know Chloe will be glad when we can open her doggie door again! 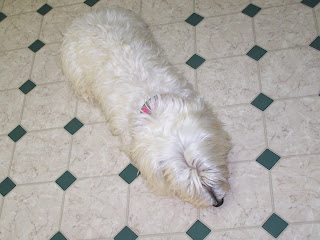 Merlin follows me wherever I go, even the bathroom. Here he is in the kitchen waiting for me to finish making myself a latte'.
We got the second dog so Chloe would get more exercise, and where are they? Sleeping, of course!
Posted by Marty at 2:35 PM