Haven't posted much lately, I thought I'd better let you know I'm still alive.  Actually I got the flu-took me out for a few days.  The whole family has been stricken.  It's made its way through almost all of us, hope it's finished!

We are supposed to fly out on Sunday for Mazatlan, but there is a problem in the works.  Cal Jet Air has decided to suspend operation as of February 5.  This means as of now we don't have a way home, and possibly no way to get there.  The last news bit I saw said they were going to combine remaining flights.  Yikes!  I hate things being up in the air like this!  I've been in contact with them-a lot.  Hopefully they will get this resolved soon-we have separately booked flights between Denver and here that might need changed, too.  I'll keep you all posted.
Posted by Marty at 8:35 PM 4 comments:

I wore the jacket to church, just to get an idea of what it needed to hang right.  Probably shouldn't do that often, it was hard concentrating on the sermon!!

A Bit of Sewing

Well, the reservations are made and the plane tickets purchased.  We are leaving in two weeks for Mazatlan. With the winter we've been having I am more than ready.  We hadn't planned on leaving quite so early, but I was prowling around on the travel sites and I had about 12 windows open.  When I booked the plane tickets for Feb. 3 and the condo for March 3, I knew I was in trouble!  God bless Vacation Internationale, I called them thinking it would be much cheaper to change the room reservations.  They fixed me right up-which was funny because I didn't think there were rooms for Feb. 3.  It's okay, we'll go now and go later on, too.  We have a boatload of points to use up.

My summer clothing supply is in pretty bad shape, so I made up my mind to remedy that this week.

Now for the lists.  I have a sitter for one dog arranged but I still have to find someone for the problem child, Merlin.  Then there are haircuts, stopping the newspaper, arranging my sub at church, etc, etc!

Gracie's are ready to go, just need to run by and give them to her.  It might brighten her day, she is down with the croup, poor girl! 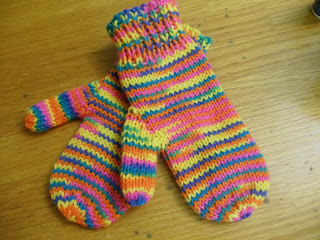 She's not the only one sick, this dumb cold has gone through the family like a locomotive.  Chris had it, that's how Gracie got it, and Stan and I have been fighting it for a while.  I got mine a bit over a week ago and am doing pretty well, just dumping the junk that builds up.  But Stan got his before Christmas and hasn't been able to shake it.  Yesterday morning, instead of going to church, he went to Urgent Care and had the doc look at his throat.  He thought it might have been strep, but the doctor said it's a sinus infection.  So, home with antibiotics, he is trying to shake off the germs.  We have gone through almost every home remedy we have-usually they work pretty well but this thing has a mind of its own!

Well, off to pay a couple of bills and do a bunch of running around.  I've been invited to a class tonight on essential oils-I've always wanted to learn more about them and I had gotten an invitation from a Facebook friend (who I've never met-she's local and is a friend of a friend) but I knew my young friend Lindsey was using the same oils so I messaged her.  As it turns out, her class is tonight and she's thrilled that I'm going.  She tried to get me to a Mary Kay meeting once, but this is way more my speed.  I'm really into natural healing and herbs and stuff.

Prowling through travel websites, so we may have a Mazatlan trip booked soon!
Posted by Marty at 10:41 AM 2 comments:

After Sydney's mittens, Stan's mom's words rang in my ears, "You can't make stepchildren!"  So I started on mittens for the rest of the kids.  These are Sam's and they match a hat I made for him. 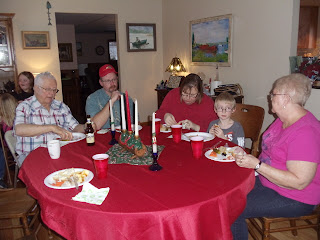 And here is our last Christmas celebration for the season.  We met at Stan's sister's house for food and a white elephant gift exchange.  What a hoot!  Even the teenagers got into it!  Then after everybody's kids left, the brothers and sisters lingered to play a round of "Greedy, Greedy!" which is a lot like Farkle.  A nice way to usher out the old year!  The actual ushering at midnight went on without us, we were home and in bed by 10:00.
Posted by Marty at 7:37 PM 1 comment: