Another Halloween Bites the Dust

Just popped in to apologize for not posting.  Not sure why-I've been sewing and knitting-but life seems to get in the way these days.  Just thought I'd drop off these shots of some curtain climbers in costume. 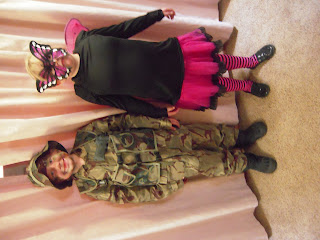 I start working in earnest at Macy's on Saturday.  Not too many shifts yet, it's still early in the season.  I could have worked there tomorrow and Friday but those are the days I work at the church.

Wow, I'm tired.  I can't believe tending to trick or treaters could be so tiring!  We set a record this year-114 kids.  The weather was so nice-70 degrees F-everybody took advantage of it.
Posted by Marty at 8:45 PM 2 comments:

Our nephew Paul was here from Seattle with his daughter, Julie.  So we had to cram as many family members as we could into my sister-in-law's house yesterday.  All four of Stan's siblings were there, plus a couple of my kids and some cousins and second cousins.  We had a great dinner and a good visit.  But the fun started after almost everybody had left: 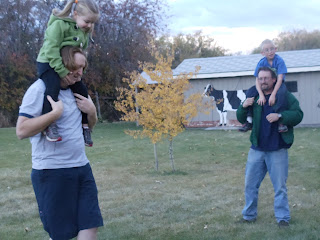 Paul's dad got involved in the game, but he won't let me share his pictures, he was a bit embarrassed!  But we had a ball watching the hijinks!

In other news, I have an interview at Macy's tomorrow.  You may remember that instead of doing the sick time paperwork over and over, I just resigned with the idea of returning.  Well, I should never have gone into the store!  I was kidnapped by a couple of managers and asked if I was ready to come back to work.  (Puleeeeese!)  So I did the online application and scheduled an interview.  I'm going to have to be firm-I don't want full time and I don't want to give up my job at the church-that's my retirement job.  Besides, my Social Security starts in February and I don't want to earn so much that it cuts my payments.

I have a ton of sewing to get done before Christmas, so I really have to budget my time.  I'm almost finished with the hats I've been knitting, so that will be out of the way.  The kids all want fleece blankets instead of pajamas so that's on my list.  I'm hoping to pick up the fleece for them tomorrow after my interview.

How About a Little Montana Beauty?

The sewing I did today: 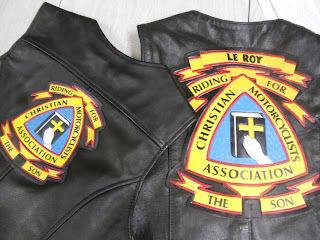 The neighbor lady just got married.  Her new husband is a retired minister, and now the two of them, both in their 70's, hit the road on their Harley and minister to bikers.  Darling couple, and I'm so happy for her.  She's a longtime friend and has worked way too hard her entire life.  You have to go through the Christian Motorcyclist's Association training to earn these patches.

They spent a week in Sturgis, SD, where they have the big international Harley Davidson convention.  They visited hospitals and ministered to the hurting and injured.  LeRoy said she is a natural-I'm not one bit surprised!
Posted by Marty at 5:30 PM 1 comment: