Had Gracie's birthday party tonight at a local gourmet pizza place.  She had a great time and I had this: 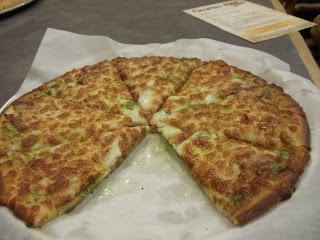 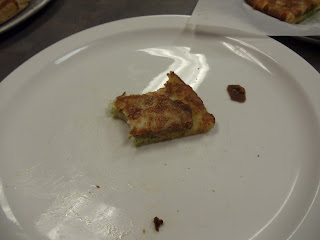 No, I didn't eat it all, but I tried!  I have enough left for two lunches this week.  Stan had one with jalapeno peppers and loved it, too!  One more good restaurant that is safe for me. 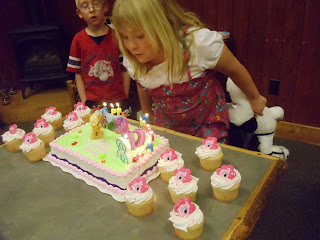 Miss Boo blowing out the candles on her My Little Pony cake.
Posted by Marty at 8:34 PM 1 comment:

Eight years ago, Stan and I drove to Salt Lake City, he drove his truck, I drove Jim and Millie's van.  We drove through Pocatello ID in the worst snowstorm we had ever seen.  The next day we took the van up to the University of Utah medical center so Jim would have a vehicle.  They had airlifted him and Millie to SLC because Millie was in labor at only 25 weeks.

That evening we got to witness the birth of a tiny 1 pound 12 ounce girl.  What a scary time!  She spent almost 4 months in the NICU, coming home with all kinds of medications and paraphernalia. 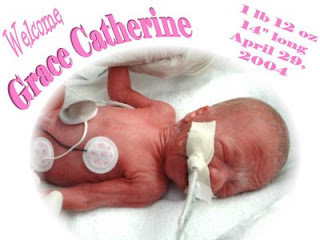 Today she is a sturdy, feisty kid-smart as a whip, and loving anything purple and pink. 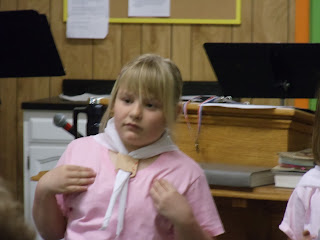 Happy birthday, Gracie-I am so grateful you stayed with us.

Our Time is Spoken For

Both kids play on the same nights, so we're doing the ballpark shuffle again!  We luck out a bit, because Gracie is playing softball this year, the softball field is back to back to some of the baseball fields, so some nights we can just stroll back and forth between innings.

My patio set is showing some wear.  Not the table, it's glass topped and is holding up nicely, but the plastic on the seats is disintegrating. 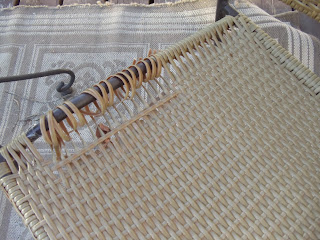 So a couple of months ago I picked up some nice heavy outside fabric from Jo-Ann's.  I was going to just recover the seat, but I like the curvy metal work on the front of the seat so instead, I just made a Velcro-on cover.  I lined it and wrapped the cover all the way around the seat and it Velcros on the underside. 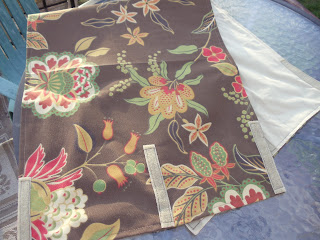 It's cut on a slant since the chair seat is tapered.  It worked out better than I hoped.  I'll take them off and bring them inside after use.  I have quite a bit of fabric left-I'm going to see if there's enough to cover the pew cushions.  I can cheat and use something else on the underside. 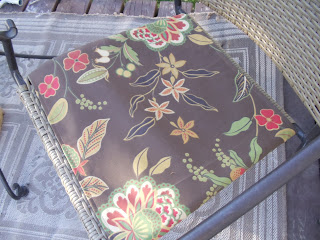 The other day, I found a recipe on Pinterest that I wanted to check out.  I like to explore the blogs that have the pinned item, and while doing that I found a recipe for cauliflower pizza crust.  I can't believe how well it turned out.  I haven't had pizza in years and this recipe just gave me back a beloved food! 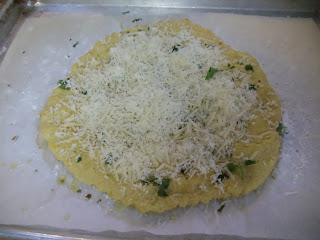 The recipe called for almond flour, but being allergic, I substituted equal amounts of tapioca flour, potato starch and coconut flour.  It wouldn't roll into a ball, so I patted it into the pan, using lots of potato starch.  Be sure you use parchment.  I've been a tightwad for so many years, but this year I broke down and bought some.  Why did I do without it for so long?!! 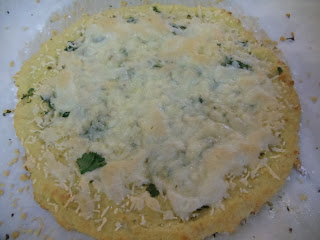 Looks very nice and you can pick it up in your hands and eat it just like wheat crust. 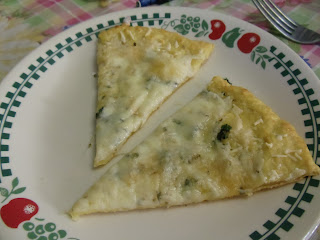 A bit ago, my friend Joan had done this post.  Since I have so much yarn that my mom left me, and there isn't much of any one color, I decided this would be an awesome project.

It is, and it is so addicting.  I think the combination of the simplicity of the pattern and and the fun of watching how each round and each color changes its looks is what makes it so addicting. 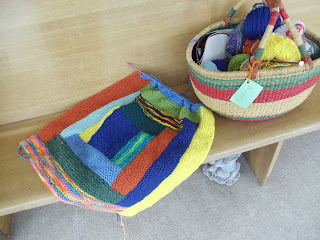 It's a really simple pattern:  Cast on 20 stitches of knitting worsted, knit in garter stitch until you have 24 garter ridges, or 48 rows.  Bind off all but the last stitch, rotate your work and start picking up stitches on the LEFT side of the piece.  A hint-you'll probably end up with as many stitches as garter ridges, not as many as you have rows.  Now knit 18 rows or 9 garter ridges, bind off all but one, then rotate and pick up stitches on the next left side of your work.  See a pattern here?  Go until you get sick of it, you run out of yarn, or it's as big as you want it.  But I warn you-you won't want to put it down, and you'll be rummaging through your stash for more yarn for the next one.  Finishing is easy-just bury the threads on the back.  Oh, and I used a #9 straight needle.  I may switch to a circular when the blanket gets bigger, we'll see.  (I hate circulars!)  One thing I might change is that I might knit a square for the center, then the afghan would be a perfect square. 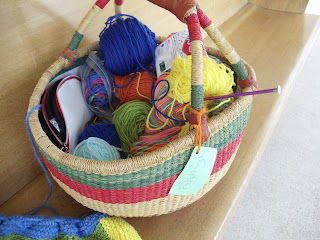 A word about my knitting basket-isn't it neat?  Last summer, there was a lady from Ghana at the Manhattan Potato Festival who had these baskets for sale.  I told her I would be back-she had $80 marked on them-not bad for a hand-woven basket-but when I came back near the end of the day, she had marked them down to $40.  She was such a nice lady I would have paid the $80.  It's really roomy and I specifically bought it for my knitting projects, but Millie thought, since it's green and red that it would be nice filled with Christmas greens and ornaments.  I'm afraid it'll never be empty of yarn, though so I might have to buy another one.  Hopefully I will see the lady at one of the many local fairs this summer.  The basket looks nice on my pew, doesn't it?  Can't wait til it warms up a bit more so I can sit out there and knit and people watch.
Posted by Marty at 9:50 AM 2 comments: 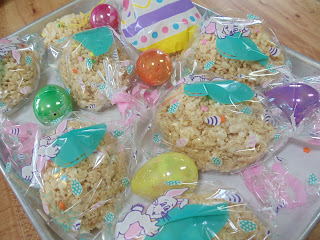 A quick check-in:  that Seder I wanted to go to?  About 4:30 this afternoon son Jim called and said he had extra tickets to, you guessed it, a Passover Seder!  So the Seder I mentioned in my last post became a reality.  They had it at their church-kind of a local megachurch-but the leader is a Christian Jewish lady from Calgary and full of life.  Very interesting and very meaningful.  It was worth it, even eating the Matzah!
Posted by Marty at 9:03 PM No comments:

It really has been a while since I posted.  Not sure what to blame that on, I guess just flitting from here to there and not lighting somewhere long enough to post.  Well, that and I needed to take and download some pictures and the camera was always in the wrong place, and I'm still lazy about climbing stairs.

But I made the effort, finally, so here's a bit of what we've been doing.

Sydney and Sam belong to a boy's group at church, called Cadets, quite similar to Boy Scouts but with a Bible message included.  They get to do all the cool things Scouts do, including crafts and camp outs.  Saturday was the Cadet-o-Rama where the boys from all over the valley could come together and compete.  They shot off rockets: 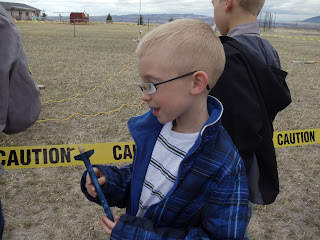 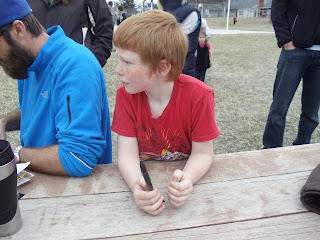 Sam couldn't find most of his rocket after he launched it, but he was still happy because he got third place in his age group for appearance.  Actually, Grandma and another mom got recruited to judge the rockets, but honestly we didn't know whose was whose.  No, really!  And Sam also won third for his craft-a nice shelf.  I didn't judge the crafts-the leaders did that.  Then they raced their cars-when my boys were in Cadets they called it the Pinewood Derby.  Syd got third in his age division, but they only gave ribbons to the top two.  They also give out the Turtle Award which goes to the slowest car that crosses the finish line.  Another boy in their group, Nels, almost got it, but his car didn't quite make it all the way across the line.  All the boys had a blast.

The girls' group, GEMS (Girls Everywhere Meeting the Savior), got to make rockets but they will shoot them off later at a church member's farm.  The boys will too, and the ones like Sam that lost their rockets will build new ones.  All the girls painted theirs pink and purple, go figure!

I've been sewing and knitting.  I finally finished the Christmas pajamas, and will give them to the kids on Easter.  I have a nice stack of flannel now-just love them all done and ready for the owners! 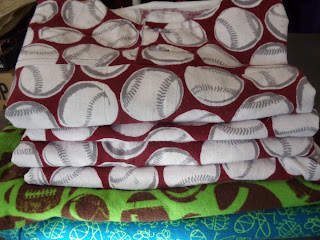 But this year, I had to make a nightgown for Gracie-she informed us she's too grown up for pajamas.  When I cut the nightgown out, it had long sleeves with elastic at the wrists.  Her other Gramma made her a nightgown the same way, but Gracie hated the elastic, so I had to come up with something different.  I cut off a portion of the sleeves, added eyelet lace, and faced it with a strip cut from the part I whacked off.  I suppose penguins are okay for Easter, right? 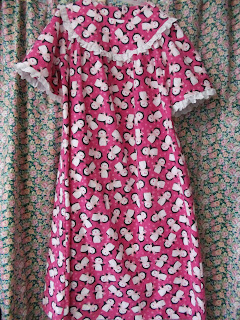 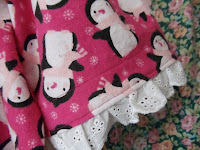 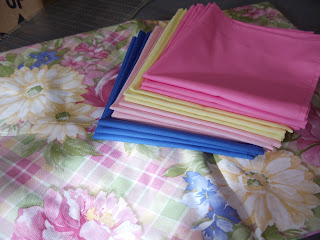 The kids are coming for Easter dinner, and yesterday, while wandering through Jo-Ann's I came across this tablecloth, marked to half price.  The creative juices started flowing, so I went home and cut out napkins from my massive fabric stash.  A little pressing and hemming and I have washable napkins to use year after year. 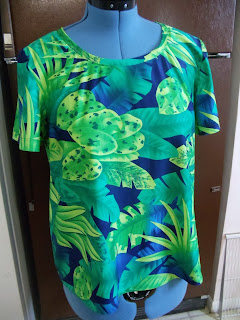 Then I started digging through my knits.  I was looking for something blue and green to match some jewelry I bought a while back.  I found this-I have a suspicion it might be swimsuit fabric, but I like it.  This one one of several pieces of fabric a good friend gave me.  She's never been fond of knits and I love them so I happily accepted all she had to offer!  I should be able to find a skirt in my closet to match for Easter.  It will be the first skirt I've worn in months, and you can bet when I get home I'll find my jeans!  Not supposed to be warm here on Easter.

As for knitting, the usual sock project is always in the car, and I finished a pair of leg warmers I started winter before last.  Not my fault-I ran out of yarn and had to wait forever for the store to get more in.  It's a different dye lot, but you can hardly see it and I'll probably just keep them in my winter box in the car.

I have tons of sock yarn left so I made up a toddler-sized sock pattern.  It really turned out cute-hopefully I'll post pics in the next few days.  I want to put them in my Etsy shop so I'm contemplating the best setting to photograph them in.

Well, you all have a blessed Easter, or a good Passover.  One of these days I'm going to go to a Seder just to see what it's like.