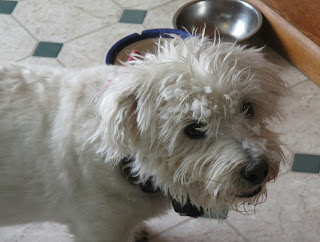 Eight years ago we adopted a three year old Westie. I bought him for $50 on Craig's List, but after he was with us a while it was obvious he had been abused. He didn't have the typical Westie ears because he'd been tied up outside with a Great Dane and the Dane chewed on his ears and they had to be amputated. He was very nervous and barked constantly. He wasn't neutered so he thought every corner in the house was fair game for potty breaks.

But he was a sweet boy and with lots of work and even more love he turned into a loveable loyal pet. Every morning while we were having coffee, Merlin would put his feet on Stan's leg so he could get his ears scratched. His best pal was Chloe, a Westie just a year older. But I was his person and wherever I went Merlin went too.

I was cautioned that he didn't like kids, but he loved our grandkids, they were good with dogs so I think that helped.

A couple of weeks ago I noticed he was coughing and even mild exercise made him winded. I took him to the vet and he was diagnosed with collapsing trachea, something small breeds can be prone to, there is really no cure. We started him on medication, but none of it helped, some of the side effects were terrible. The vet was working on compounding a different medication. But today I could tell his breathing was getting worse and worse. I decided that I would take him in to the vet tomorrow, I wasn't going to let him suffer. Before I left for church this morning I gave him a cuddle and told him that if he wanted to leave it was fine.

All day he sat and lay by my side just looking at me. Every now and then he would slip out the doggie door and sit on the deck for a while. About an hour ago he turned up missing and when I checked the deck, there he was-he made sure we wouldn't have to see him die.

So our precious boy is gone and Chloe is our only dog now. She never left his side all day, I think she knew, too. I wrapped him in a baby blanket that came with him when the woman brought him. He's in the garage and tomorrow I'll call the vet to arrange cremation. It sure is hard to say goodbye.
Posted by Marty at 11:44 PM